The application was to register a shape trade mark for confectionery (class 30). The trade mark was described as follows: 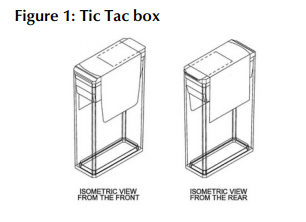 This application was always going to be difficult given the generally non-descript and functional nature of the Tic Tac box. In other circumstances, if starting from scratch, an unusual or striking (non-functional) element could be added to the shape to improve the prospects of registration. In addition, if there had been further evidence available of use of the box without the Tic Tac label, this may also have improved the applicant’s prospects of registration under s 41(6)(a) of the Trade Marks Act 1995 (Cth) (the Act) (discussed below).

Registration under the Trade Marks Act

Section 41 of the Act sets out the criteria to be applied in determining whether or not there are grounds for rejecting an application for registration of a trade mark. In this case, in a nutshell, the applicant based its claim to register its trade mark on the following:

To read the remainder of this article, please click here.